Here's the few ideas for Elysian Tail should be make an shared universe franchise between Dust An Elysian Tail (before having 10th Anniversary on 2022) and Elysian Tail Movie. There could be having good ideas for Dean Dodrill.

There is once i played on Chapter 4, Elder Gray Eyes have speak to Blade of Ahrah was only one Blade of Elysium, there was an hint around that i figured out in upcoming movie screens, both game and movie have know about Blades of Elysium that can be found.

Well if you have mentioned that i got good point with this: 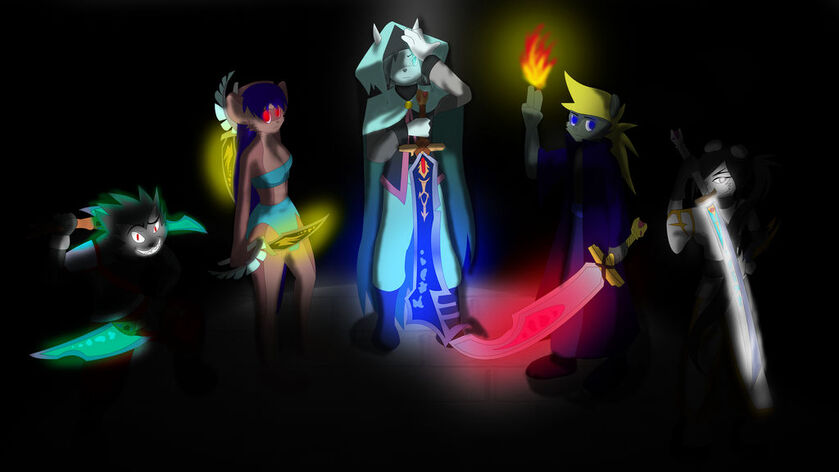 Yep, as you can see, Dust, Bonnie and Leddinger are found three Blades of Elysium but other two are missing.

Dust - Himself yes, Sen-Mithrarin who is the only one who can defeat General Gaius. He wields Blade of Ahrah (blue glowing Blade of Elysium) from beginning.

Bonnie - From the movie, she have brave to protect Taka. She wields yellow glowing Blade of Elysium (duo blade).

Leddinger - Bonnie's mentor, i heard about him when i saw one video. He wields red glowing Blade of Elysium.

Unnamed Male Character^ - This looks like another Warmblood like others, who wields an green glowing Blade of Elysium (another duo blade).

Unnamed Female Character^ - This might have looks like an warrioress and badass woman, who wields an white glowing Blade of Elysium.

^: One of two characters in this image that i don't know who are their names.

The King of Elysian Kingdom (Unnamed)

One of character in Dust: An Elysian Tail that mentioned by Cassius. But i didn't seen him in this Wikia where he's mentioned, regardless he been against by Jin and Ginger's parents for reason, however there is something not right about him, because Gaius planning to kill all Moonbloods like Fuse did kill all Warmbloods?

But is something i guesses are... What's wrong with him? Why he destroy Moonbloods, so much trouble he had, why he taken attacks Ginger's parents, what's big idea with him? How he done to destroy Zeplich Village and why he can't stand be friendly for each Moonbloods? Or he been friendly. What ever he seens different to meet Dust, what shall he doing for now? The only way for Dust, must find the answer.

You know that's will happening from what else gonna have expand story for Dust: An Elysian Tail, to have more and involving backstories among for all characters in Elysian Tail franchise. This will having more histories among Warmbloods and Moonbloods and long-time legacy war haves, including Mudpot people and kingdom. This will have huge world with multiple most area around the world of Falana.

Well, i was been dreaming about Dust and Ginger, i can feeling that i have a dream from two characters.

Nothing seens the trully where happening, the reason is.... Ginger kiss Dust, like wow is cute! And i don't know what happen for lucking they have, if been overwell at 9 years ago and surelly they didn't involve romances yet. So i been thinking that will have good idea for Ginger who loves Dust so much as behind to says "Stay safe, Dust", so this world gains to feeling his love.

Between Warmbloods and Moonbloods aren't only two species, they are lots of them in Falana:

Exileblood - A fearless species which is what looks like strongest armies, berserker-type and take on supreme campaign.

Springblood - An most, friendly species as the strongest allies and support helpful.

Airblood - An flying species that can be flying in the sky.

Oceanblood - An sea species which can swimming in the water, that comes from the island to protecting from monsters.

Umbrablood - An arachnid species which they looks like predatory.

Pieceblood - An royal species who fighting for freedom and take on the battle in Arena.

Halfblood - An great species from the legacy history that would lead to continuation, forced them with seveal species.

From their ethnicities are called "Elysians".

In the beginning journey to Aurora Village, there are many locations that can be happen to see every i ever imagined, it will be full world of Falana, there are lots of areas and be sure you will see these characters for what happen next.