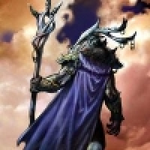 My favorite bedtime story my mom read when I was a kid was The Hobbit. That pretty much formed me into a fantasy/sci fi book devourer, and then an RPG player when computer games came around. My favorite games are always those that have a very good, well-written, and catching story. One game I played (which had a horrible game engine, but excellent story) said: "Have you played a good book recently?"

Dust caught me. It's engaging, the character's are lovable, and the ending...Only a couple games have gotten me close to tearing up and Dust is one of them. And even though I mostly prefer turn-based RPGs like Spiderweb Software's, or games like Recettear, Dust's fast-paced combo combat was still extremely fun and surprisingly easy. Usually I run in terror from games with "combo" attacks. (I blame my childhood - my only console was an Atari)

Retrieved from "https://elysiantail.fandom.com/wiki/User:Feathin?oldid=5406"
Community content is available under CC-BY-SA unless otherwise noted.