Dust is the player protagonist and an unknown warrior in the game Dust: An Elysian Tail. He is the wielder of the Blade of Ahrah.

Dust is the first fully seen character in the game. He awakes in The Glade, a small glade in the mountains, with no memory of his past or identity. A mysterious blade, Ahrah, flies to him and explains that Dust is Ahrah's fated sword-bearer. Fidget, a nimbat, arrives a short time after claiming to be the guardian of the sword, and demanding its return. Despite her efforts to regain Ahrah, the sword tells her that she will join him and Dust on their journey. Seemingly mildly surprised, Fidget agrees, although she tells Dust that she would like Ahrah back as soon as he is finished with it. Dust then contemplates his identity and Ahrah tells him to set forth towards the east of Falana to discover his past.

Traveling through The Glade, Dust is introduced to many of the basic gameplay moves and mechanics, and acquires the Dash and Dust Storm abilities. A few screens later, Dust, Ahrah, and Fidget stop on an overlook above a valley. Dust comments that he seems to remember the view, and Ahrah asks if he recognizes the village at the base of the cliffs. Dust replies that he cannot tell from their view, and proceeds down into the valley to get closer

After fighting several more screens full of monsters, the trio encounters the first merchant tent. The merchant gives Dust his first quest, A New Venture, and shows him and the player the basics of shops. The player will likely have materials he can sell the merchant to fulfill the quest (it is the player's choice whether Dust completes this quest this or not).

Leaving The Glade, Dust arrives outside of a peaceful village where he meets Cora. She tells him of voices crying for help from the farm just beyond them. Fidget hears them as well, and urges Dust onwards. The group comes across a small farm, and its inhabitants, Geehan and Oneida, cowering in fear. Oneida calls to Dust for help and, almost immediately, a giant appears. In the resulting battle, which could be considered the 'boss battle' of the prologue, Dust can use all of his newly learned combos and abilities to defeat the giant. However, the parry technique is possibly the most important, as it can shield Dust from the monster's attacks and leave it vulnerable to counterattacks, which can considerably shorten the battle. When Dust defeats the giant, Fidget voices her relief and fatigue; however, Oneida quickly tells them that there are more giants. Two appear, and Dust must defeat them as well, likely using many of the tactics he used to kill the first giant. When the two giants are killed as well, Oneida and Geehan thank Dust for his help. Ahrah praises Dust as being a worthy swords-master, and the trio continues to Aurora Village, ending the prologue.

Immediately after entering the village, Dust, Ahrah, and Fidget encounter two guards named Bean and Calum. While Bean expresses gratitude towards the trio when Dust informs him that he took down the giants at the farm, Calum is immediately suspicious. Dust becomes defensive when Calum indirectly accuses him of being responsible for the attack, but Bean quickly calms him down and excuses Calum. With no answers to give the guards when they ask where the travelers came from, due to Dust's not knowing this information himself, Fidget lies that they are prospectors. Though skeptical, Calum lets them pass, although he warns that he will be watching them. After passing the guards, Dust asks Fidget about her unbelievable 'prospector' lie; Fidget replies that it was the best she could come up with, and Dust never brings up the issue again.

Later down the road, he will indeed discover his past when he stumbles into his old household. He recollects his final moments as Jin, before he and his companions are joined by Ginger and Elder Gray-Eyes. They then tell him that he is a fusion of two souls, of Jin and his murderer, Cassius, as well as revealing that Ginger was the sister of Jin, making her his sister as well. With his questions answered, he departs for Gaius, whom tries to sway Dust to his side once more by constantly manipulating the Cassius side of him. However, Dust makes a stand and exclaims that he has his own choice, and chooses not to be bound by his former incarnations. With a climatic battle with Gaius, Dust is weakened by an explosion, but is strong enough to crawl to the edge of a cliff, where Gaius is screaming in agony for Cassius and holding on for his life. Dust grasps his hand, giving him a second chance and attempting to save him. Sadly, when Gaius sees Dust's face (no longer concealed by his satgat), he realizes that Cassius truly is gone, and remarks despondently that Cassius and the world that they had carved were gone. Out of desperation, Gaius then willingly ends his life by letting go of Dust's hand, declining his help, and throwing himself into the lava. Dust looks sadly after the General, then collapses atop the cliff in exhaustion, but soon Fidget manages to reach him. She tries to summon Dust to his feet, but he declines, claiming that while he did everything right, it was sometimes not enough when the Life Thread calls. He then thanks her, smiling weakly. Fidget tearfully and regrettably abandons Dust, who is consumed by the lava. However, as Ginger and Fidget mourn the apparent loss of Ahrah and Dust, both notice a storm of luminous cyan dust rising, along with a rejuvenated Ahrah, before parting for the Glade, hinting that Dust and Ahrah are still alive.

Dust is shy, serious, and very reserved, but with good reason and a virtuous, heroic heart. His shyness usually makes him come across as a bit stand-offish, which Fidget often points out when he is talking to people. He has a good sense of morality, knowing the difference between right and wrong, going overboard with his sense of justice at certain times; however he is more than willing to help people no matter what help they are looking for.

Dust displays distinctive personalities carried on from two souls who have passed away prior to the main story, Cassius and Jin.

Carrying traits from Cassius, Dust is gifted (or cursed) with the knowledge of combat, enabling him to easily defeat several mobs at a time and wield extraordinary amounts of power. Though with this advantage in battle, he appears aggressive towards situations beyond his control, often to the point of feeling agitated or violent at minor slip-ups.

Dust also carries the traits of Jin, which makes act thoughtful and kind towards people and label his actions with reason and saintly virtue. The majority of Dust's strong-willed behavior originates from Jin's trait of following through with tasks and using a great deal of consideration towards victims and offenders.

Dust is quite agile on his own, being able to swing the Blade of Ahrah easily, even in mid-air. In addition, he learns several skills over the course of the game:

A list of combo moves can be found at Ahrah's page.

Dust is capable of doing quite a bit of damage in his own right and, as Fidget jokingly suggests, button mashing is fairly effective for those who don't want to learn the combos.

A fast way to earn experience and give Dust an early advantage in the game is to find a save point right next to the edge of a zone with enemies; as save points regenerate your energy meter this allows you to easily pull off ranged blasts with Fidget and your dust storm, racking up huge combo counts and hence bonus experience.

Learning those combos though, actually improves how much experience you gain and makes it easier clearing out larger groups of enemies more efficiently so Dust does not get hurt. Adding into it what Fidget can toss and using a skill you obtain in The Glade you can quickly rack up multiple hundred combo counts with ease. A list of useful combos can be found in the game's help section or here.

Balancing Dust Storm and normal melee attacks is crucial for keeping high combo hits and obliterate enemies without being hit, as normal attacks replenishes the energy bar. Dust can even replenish Fidget's energy by attack enemies that are already dead; throwing attacks, such as Ash Bound (Aerial) are some of the easiest ways to fill the energy bar.

Learning enemy attack patterns is a must on higher difficulties in order to successfully dodge, parry or intercept incoming attacks. This is mostly useful against large enemies that cannot be easily stunned.

Dust is not only good on the ground, taking the fight to the air has its own advantages and a few disadvantages as well. Most of what you learn to do as Dust will ultimately work around how you, the Player, feel the most comfortable with. learning what Dust can and cannot do, is crucial however on the higher difficulties. The game's targeting system makes easier for Dust to take his combats into air, as he will "glide" towards enemies, even if they are far away.

Fidget's projectile attack can be safer and much more effective than melee attack because there are many items with Fidget boost attribute (ranging from x1.1 - x3 Fidget attack damage), so it is a good idea to start investing more gems on Fidget following the mid game if the player prefers an easy time against later enemies. Combined with proper dodging, this strategy is usually effective against most of the enemies in the game. This is not as applicable for higher difficulties where Fidget's energy bar does not regenerate as quickly unless with a melee-combo thrown into the mix. 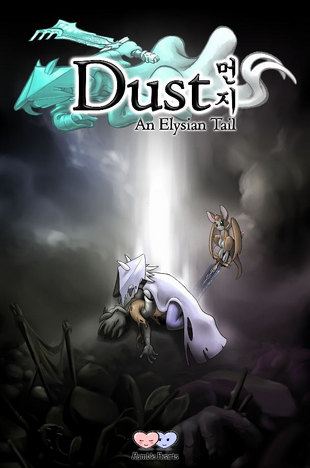 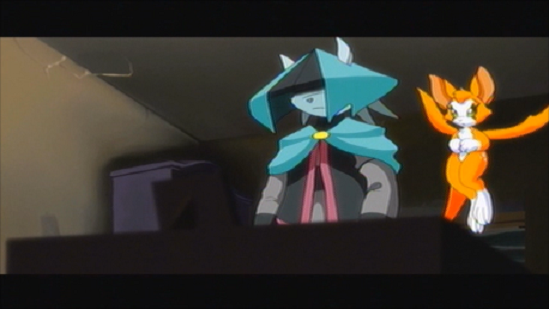 Dust and Fidget in Zeplich village 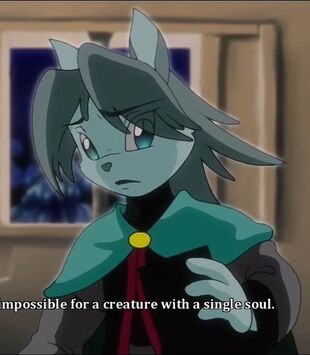 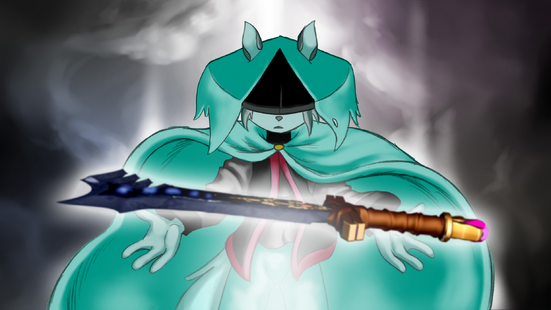 Dust and Ahrah from the steam trading card 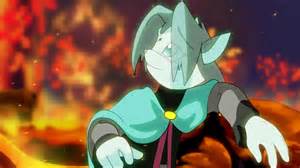 Dust after he accepts the Life Thread's call at the end of the game.
Русский
Community content is available under CC-BY-SA unless otherwise noted.
Advertisement